There will be no union organization for MGM Springfield security guards. On Tuesday 172 out of the 195 total security guards cast their vote on whether or not to organize with LEOSU. The Law Enforcement Security Officers Union. 115 employees voted no and 56 voted yes. The effort was launched by security officer Kevin Frazier after reportedly not receiving pay raises at that were promised. It was also noted that security officers who took training like CPR and would train others would receive an extra dollar an hour. Officers were under the impression that they were to have a pay increase to $18 after their 90 day probationary period ended. Currently they are paid $16 an hour. Also noted and there complaint was that there was no pay differential for overnight shift, Sundays, or holidays.

Currently many of the security guards are former military veterans, retired police officers, and correctional officer’s. These individuals have the experience and certifications that it takes to work in law enforcement. They are all used to receiving the benefits of that a union provides. It’s not too hard to imagine that they would hope to receive the same benefits while working for a casino. This is one of these “how is it really gonna work out in real life” scenarios.

Our beloved Sergeant Delaney left the Springfield Police Department after over two decades of service to lead the MGM security team. Only to have submitted for early retirement as a result of this attempt at unionization.

On the other side of the voting coin lot of the security employees are young and eager to grow with in the company. These individuals may have not yet worked under unionization. And the thought of having an additional $25 a week taking out of there check for something they believe they don’t need didn’t set well clearly.

I was lucky enough to have been contacted by several members of the security staff at MGM Springfield leading up to this vote. I spoke to guard who were both for and against organizing with the union.

Honestly I was really amazed and almost proud to hear the real dedication that some of these employees who voted “NO” had. “ We believe in our managers” One worker told me. I was also informed and something that I believe important to this conversation. No other MGM property in the country offers a shift differential. They are a 24 hour business. If you want to work there you’re going to work different hours. Sharing with me that some guards had an understanding that the company was still new and that they were places for improvements that they believe their managers would work with them on improving. I hope if any MGM brass is reading this they realize what a true value these employees bring to their table. I truly was impressed and almost in aw of their died to the wool dedication to the company.

President MGM Springfield Michael Mathis wrote a personal letter to the employees. He wrote about not allowing “strangers to come between us”. Also writing “ let’s tell this union to go away”.   And it turns out that it worked. The same union in 2008 had an unsuccessful bed to organize the MGM Mirage in Las Vegas Nevada.  The group also had been reported to employ homeless people to picket.

So for another year there will not be any talk of a union for the security team at MGM Springfield. Have been reports of other departments discussing organization. I’ll keep you up-to-date as I hear any new developments.

The real estate development group Davenport has released they are going to be announcing their retail tenant buy the years end for their new 11,000 square-foot Main Street location.

The property consist of an acre and a quarter and was purchased by Davenport for $1.6 million. The property is set to have nice retail frontage with parking in the rear. Davenport also owns the Springfield Plaza which it purchased in 2014. Also the old Registry of motor vehicles building on liberty Street. They have publicize a retail development in that location. They also on the former Willys – Overland building located at 151 Chestnut St. their plan is to renovate this building into apartments. This property shit just behind the famous Apermont Triangle where Kimball Towers is located. This is the sight of the very first broadcast radio station in the United States but more on that later. More recently this neighborhood which rocked buy a gas leak explosion that leveled many properties in that direct neighborhood. I for one couldn’t be happier to see this type of exciting energy pouring into the downtown area and supporting neighborhoods. I have always believed that Springfield is a beautiful city.  Easy to walk and enriching to live in. I sold and leased commercial real estate for in the area for many years and reading the news today I’m thinking perhaps I should contact my old firm. People are making money at Springfield again and that’s really nice. 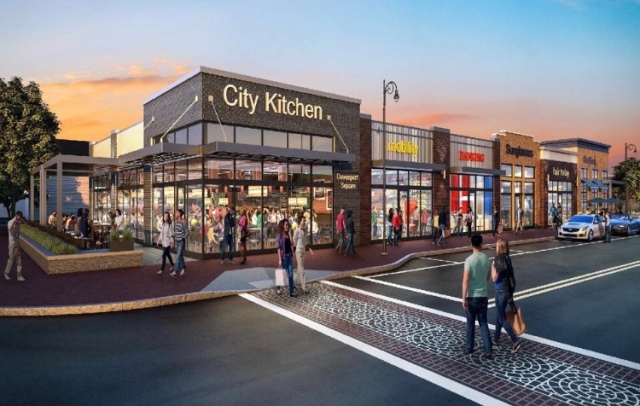 Now for the big story Mohegan Sun announces their interest in the purchase of the Wynn encore development and Everett Massachusetts. The $2.5 billion project is still not complete and it looks like the Mohegan tribe would be more than happy to wrap it up for them. This is a super juicy story in my opinion.  The Massachusetts gaming commission is facing a lawsuit over it’s investigation into this sexual misconduct by Steve Wynn. And allowing A license to be approved for his group. Everett Mayer Carlo DeMaria has been coded in saying that they “are not welcome to operate in Leverett”.

Mohegan sun lost two win for that license in 2014.   Currently the Massachusetts gaming commission was supposed to issue a report on the Wynn company’s sustainability.

That report is due in December. At which time the commission is to hold hearings. Which would make this offer extremely timely. Another smart move played by Steve Wynn himself that will likely delay that report.  He is suing the MA gaming commission not to release information on their previous investigation.

Could you imagine if Mohegan sun was able to accomplish this? They would be without question the dominating force in Northeast a gaming resort casino business. The property that Wynn originally envisioned was a beautiful resort.  Mohegan Sun’s reputation of excellence in the gaming community I could imagine this being a spectacular property.  That being said all of this would require an amendment of the IGRA.  Given the current executive office’s view on tribal issues this seems like its going to be a bit of a long shot or at least one a heck of a fight.

However I think I would rather see another large casino operator acquire ownership operating of that property. Let’s continue to split this pie up. Possibly an operator like Caesar’s could come to play. Even though when they originally competed for the eastern state licensed the Massachusetts gaming commission deemed them unfit to hold a license. But a lot is changing with CZR. Just because I’m at Caesars player I guess I’m a little biased I want them to buy the property and turn it into Harrah’s Boston Harbor.

And of coarse MGM is going to put up a fight. Could they as well be interested in acquiring the property? Of course it would mean they would be forced to sell their brand new Springfield property. This is where all of this to me becomes hyper fascinating. I’ll do my best to dig in and find out what I can and report it all back to you.

Last thing I wanted to talk to you guys about today was all the fun I’ve been having on that new video poker site.   As you know I’ve signed up as a gold member and I’ve been receiving the benefits of playing in training mode for a while now. Being able to see if your playing the hand correctly before you dump your cards is really great for me. Also tracking my hands in seeing the percentage of hands that I played correctly is also helpful. One of the features I really like it’s being able to play all of the different games and spend time understanding the pay tables for each. I found some new games that I really like and I am looking forward to playing at the casino. I have been having a lot of fun competing on the daily price contest.   They have a $25 daily , $400 weekly, and $500 monthly cash prize. One feature I like is if you do well it shows you how much money you would have one if you were actually playing a cash game. So I haven’t won the daily yet but I’m working on it I’ll be sure to let you guys now in the closed group when I do. 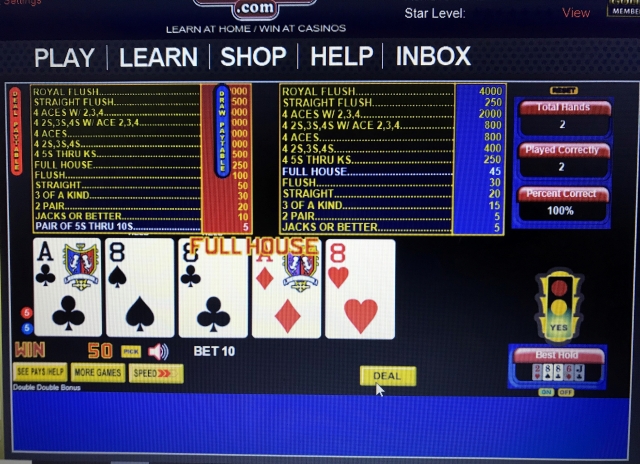 Video poker can be a lot of fun. You can play at your own pace and no one‘s going to yell at you if you make a mistake. It’s popular with recreational gamblers because it’s the most player edged game on the casino floor. And you can increase your edge on the house by learning how to play perfect or at least good strategy while playing the games.

All of my members and listeners receive a free 14 day gold membership in all of the benefits that come with it. You can play in training mode, enter the daily contest and win cash, even chat in the chat room with the fellow video poker players. There is no credit card required all you need is an email. After the 14 days you go back to a free member you still can play all of the games just not training mode. If you do decide that you like the gold it’s only $8.95 a month. And if you join I get a little spiff, so come and join me in side the video poker room I’m having a lot of fun.  Just be sure to sign up through my special link here.

That’s all for this week.  Thank for reading and as always Players.