On this installment of Art in The Game we have a special business highlight. Since the early construction of MGM Springfield I have been fascinated by local businesses that have risen to the challenge of assisting Springfield in becoming a new choice as an entertainment and leisure destination.  The type of services and entertainment that attracts a resort casino tourist require an extreme attention to detail coupled with outstanding customer service. I’m proud to say that there are many homegrown business is right here in western Massachusetts who have not only risen to that challenge. Their efforts are actually producing the results in concert with MGM Springfield. One of those such companies is King Ward Coach Lines the operator of the MGM Lion Line.

The Lion Line is the MGM deluxe King Ward coach that whisks players from around the region to MGM Springfield. The coach is sparkling new and absolutely gorgeous inside and out.  With Flat screen TVs, free Wi-Fi, power outlets, and super comfortable chairs you’ll arrive feeling like a VIP. Especially when the MGM group host boards the bus and hands you your free $20 in slot play just for riding. That’s right I’m going to teach you how to show up at the casino already making money!

The Lion Line has daily runs from Western Massachusetts and by weekly runs to the Boston and Worcester area’s. Players from the north can jump on the line on Wednesday in Greenfield. Friends from Connecticut have daily options from the Hartford area and several others. Here is MGM’s link to the schedule. https://www.mgmspringfield.com/en/casino/bus.html

You can also find it on the King Ward website and other fun information here. http://www.kingward.com/mgm-springfield.html 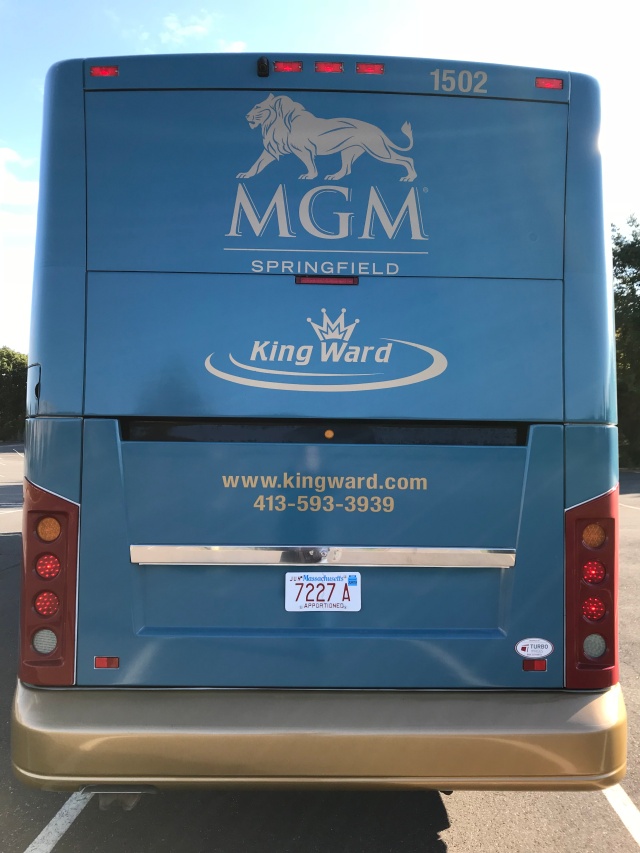 After seeing photos of the new bus on the internet and the news I decided I really wanted to ride and see what all the fuss was about. I caught up with everyone getting on at the Holyoke Ingleside mall pick up on Wednesday morning. It was a brisk autumn day with bright blue skies.  The sun lit up the coach in warm morning light. As I climbed a-bored I was greeted by my smiling driver and a few passengers who had already found their seats. As soon as you get on board you can see why this coach MGM wanted and why its price tag was over a half of a million dollars.  You can’t help to feel like a bit of a Rockstar riding up high behind tinted glass. You’ll see for yourself it’s very nice.

The first happy couple I got to chat with where Stein and his wife Pat. This was their fourth time riding the bus to MGM. They shared with me how much they enjoyed the camaraderie with the other players and passengers. “It’s a nice day out with people “said Stein. I spoke to Sandy from Chicopee who told me this was her 5th time riding the Lion Line. I had a chance to chat with a couple of ladies Pauline from Holyoke and Eveline from Chicopee who love their penny slots.  “Never more than $.90 a spin “she told me.  “We love riding the bus it’s a nice easy ride” Everyone I spoke with had a great attitude and were already having a fun day.

Today was Wednesday and that means it’s senior day at MGM Springfield. When seniors swipe their M life card at the kiosk they get a 15% off coupon for the restaurants at the South End Market.  Also it was also a winning Wednesday.  Every 30 minutes and active slot player is awarded a free play prize.

Perhaps one of the reasons folks like taking the Lion Line is that no matter what Run you take everyone who rides gets $20 free slot play. My bonus tip even the $10 local run gets you $20 in free slot play!  So all the runs that are local cost $10 you still get $20 free slot play. Other runs are $20 but you get the slot play of $20 so it’s a free ride.  I didn’t get a chance to ride home with my new friends and players but I hope they all had a great day.

Nancy at he M Life desk added my $20 free slot play in a jiff.

After playing my $20 in free slot play and perhaps $20 more on Ocean Magic I was treated to a private coach ride back to King Ward headquarters. Dennis King President and owner was kind enough to sit down with me in the conference room and talk about his involvement with MGM Springfield.

“ The people of MGM have been great to work with”. Dennis remarks.  He shared the excitement of being awarded the bid to be the coach provider for the Casino ‘s Lion Line.  That’s not all that King Ward does with MGM Springfield. Dennis shared with me that he also was contacted just prior to their grand opening weekend in late August. “ They asked us to provide park-and-ride services for their grand opening. They wanted 20 busses! And halfway through the first day they called me and said they wanted to keep it running through the whole weekend“! True to the founders Robert King and Russ Ward the team at King Ward and MGM Springfield came through with flying colors.  Hosting a spectacular well planned event.

Dennis also gave us some inside info on handling MGM’s top performers such as Stevie Wonder. “ when Mr. wonder wanted to go to the airport we gave him an entire brand new bus all to himself”. “We also bring high rollers from MGM direct to Gillette Stadium for every home Patriots game during the NFL season”. Equipped with a VIP host these professional sports trips must be amazing!  If there is an extra seat please do let me know. 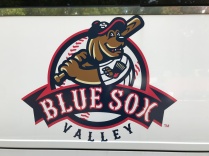 Quite an amazing story from a local company with humble beginnings. Founded in 1987 by Dennis‘s father Robert King and partner Russ Ward their first clientele were school children running mostly a school bus line and a few coaches. In 1997 they purchased US Express Bus lines becoming the second largest bus line in Western Massachusetts.  Then in 2003 after countless years of cleaning buses inside and out, driving, working in the office. Dennis finally saved enough money to buy the company from his father. King Ward coach’s also carry many of our local collegiate and professional sports teams.  They operate the official bus for the AHL Springfield Thunderbirds. The Holyoke Blue Sox baseball team. Mount Holyoke college. Springfield College and many others. They have trips all over the region from Atlantic City to Montreal. Sporting events are easy with their custom trips. I saw a few photos on Facebook from an Oktoberfest day trip that they had.  I think I want to go on that next year.  It’s exciting to see what the company has achieved today.  In my opinion it’s very well-deserved. Isn’t great to see a local story like this?  “Local guys do great”!  These folks employee over 75 people. They are very active in local charities.  They work hard and provide outstanding service and that makes our town and our spirit look and feel great to our new visitors.

Thank you King Ward Coach lines and MGM Springfield. We are proud people here in Western mass. Folks like you are proof that we have Art in our Game.

Thank you for reading.  Please tell me what you think. As always…Great Luck players!

This site uses Akismet to reduce spam. Learn how your comment data is processed.